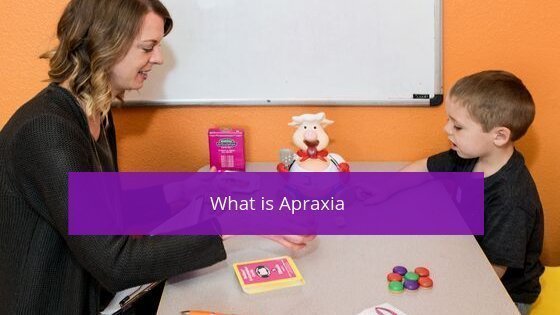 Apraxia is a neurological condition that makes it impossible or difficult for healthy muscles to perform certain movements. There are different forms of this condition, with one being childhood apraxia of speech (CAS). A child with CAS finds it difficult to make accurate movements when attempting to speak.

Your child’s tongue, jaw, and lips must move in a specific way to form accurate words and sounds. This also allows them to speak with the appropriate rhythm and speed. But the brain is the leader, in that it must send the correct directions to the speech muscles. So although the child’s speech muscles are healthy, there’s still a disconnect.

Speech therapy is a common treatment for any child with APRAXIA OF SPEECH. During therapy, a speech-language pathologist helps your child practice saying phrases, words, and syllables. This gives the child a safe and nurturing environment in which to improve their speech.

CAS Symptoms
A child with APRAXIA OF SPEECH may exhibit several different symptoms or characteristics. The child’s age and severity of the condition commonly play a role in the symptoms the child displays.

Between the ages of 18 months to 2 years, a child with CAS might:

1. Speak fewer words than a typical child of their age.

2. Speak their first words much later than other children of their age.

3. Have the ability to form very few consonants or vowel sounds.

Between the ages of 2 and 4, a child with CAS might:

1. Have problems pronouncing words that sound similar, such as “bye” sounding like “eye”.

2. Break words into distinct syllables instead of simply pronouncing the word.

There are markers that distinguish CAS from other speech disorders. But a child with CAS won’t necessarily display these markers. Some markers normally associated only with CAS include:

– Visibly struggling with the tongue, lips, or jaw to correctly pronounce words.

– Struggling to pronounce the correct vowel but consistently saying it incorrectly.

– Having trouble pronouncing the same word correctly when spoken several times in a row.

– Having difficulty pronouncing simple words, such as “cat” or “see”.

If your child struggles to make sounds but doesn’t struggle with muscle movement, they might have another type of disorder. Dysarthria, phonological, and articulation disorders are other speech disorders often confused with CAS.

Causes of Apraxia in Children
CAS can have several reasons but in most cases, its cause is undetermined. A child with CAS usually doesn’t have any signs of problems with the brain. However, the disorder is sometimes caused by a brain injury such as a stroke, head trauma, or infection.

Genetics or metabolic conditions are also sometimes at fault. For instance, children with galactosemia are more likely to develop CAS than other children. Galactosemia is a group of inherited disorders that hinders the body’s ability to produce and process energy from sugar.

A child with CAS can possibly outgrow the disorder as they develop. In some other speech or developmental disorders, the child might just develop slower than most children their age. But with CAS, the child will likely need prolonged speech therapy to progress in their development.

Complications Caused by CAS
A child with CAS might develop additional communication problems. Although these problems aren’t caused by CAS, they often go hand-in-hand with the disorder. For example, a child with CAS can struggle with writing, spelling, and reading. They may also have problems with coordination and fine motor skills.

Treatment
The earlier your child begins treatment, the better. With childhood apraxia of speech, early intervention can reduce the risk of your child developing additional problems. If your child has speech problems, contact a speech-language pathologist for help.